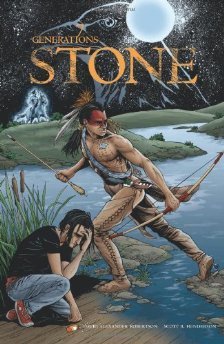 "Stone introduces Edwin, a young man who must discover his family’s past if he is to have any future. Edwin learns of his ancestor Stone, a young Plains Cree man, who came of age in the early 19th century. Following a vision quest, Stone aspires to be like his older brother, Bear, a member of the Warrior Society. But when Bear is tragically killed during a Blackfoot raid, Stone, the best shot and rider in his encampment, must overcome his grief and avenge his brother’s death. Only then can he begin a new life with his bride, Nahoway. It is Stone’s story that drives Edwin to embark on his own quest." - Highwater Press

Copyright 2010 by David Alexander Robertson and Scott B. Henderson, all rights reserved.