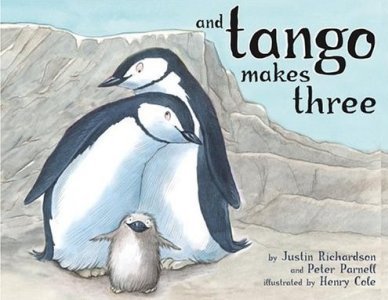 This story is based on the two male penguins in New York's Central Park Zoo, Roy and Silo, who made a nest together but discovered neither of them could lay an egg. They watched the other penguins and tried to hatch a rock that looked like an egg. Zookeepers, realizing that Roy and Silo were a couple, brought them an egg that another couple of penguins could not care for. After taking turns sitting on the egg it eventually hatched, The female chick was named Tango, who completed the family.

The book has become one of the most controversial picture books in the US due to topic of same-sex parents. It has also been subject of Singapore's ban on pro-LGBT books with family themes.