A Day no Pigs would Die 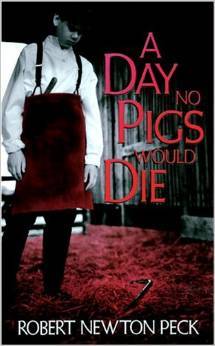 A Day no Pigs would Die

This coming-of-age story is set in 1920s rural Vermont, and focuses on Robert, a teenage boy who is becoming closer with his father, who is a butcher who slaughters hogs. Robert is given a pet pig, Pinky, from his neighbours after helping their cow give birth. However, Robert's family faces such economic hardships that Pinky is slaughtered. This scene is extremely graphic and accurate.

The book has been challenged for this violent content, as well as for a sexually explicit scene that describes the mating of a boar with a sow, which has been compared to a rape scene.